An Impolite Guide to Theater History 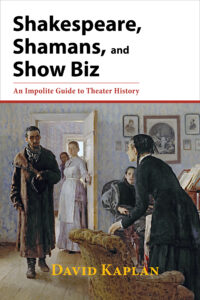 In twenty-four chapters David Kaplan offers ideas, opinions, theories, and facts for someone who wants to be a theater artist today in hopes of creating their own vision of theater-making, one informed by, and in the context of, theater history. This book explores what theater artists have done before and what they, inspired by history, might do next.

About the cover (excerpt from chapter 14 Inside Out):

In Ilya Repin’s “The Unexpected Return,” painted between 1884 and 1888, two women stand in a doorway. The older woman, a peasant, has her head wrapped in a scarf. She peeps in shadow from behind a young, aproned housemaid, whose face is a complex of worry and surprise. The housemaid is holding the door open for a gaunt bearded man in a long brown coat and dust-covered boots who has entered the room, towards those of us viewing the painting. He doesn’t look at us. His burning eyes are turned to a gray-haired woman in black who has half-risen from a flowery armchair to stare back at him. We don’t see her full face, just her profile; her posture tells us she is startled. This might be a scene in a play. As an audience would in a theater, the viewers of the painting are meant to deduce from what they see that the man is the father of the family (the deference of the maid to him is the clue), and his appearance is an unexpected surprise (the open-mouthed reaction of the woman still seated gives us that). In 1888 Russians would have recognized from the man’s coat that he’s come home from a term of forced labor in Siberia.

In Russia—where audiences were familiar with such psychological paintings as Repin’s—an actor who called himself Konstantin Stanislavsky began a Russian revolution in theater, anticipated by Scandinavian playwrights such as Ibsen and Strindberg.

The Collected Five Approaches to Acting

Part One: Getting to the Task

Part Four: Inhabiting the World of the Play